A fitting end to our first, lets call it "annual" Captain Kidd month. Kudos to youtuber UpsideDownDog for capturing this monumental footage of Kidd's execution on 23rd may 1701.

Its been good to see so many new readers/downloaders over this month, stick with us. Up next we'll be exploring our areas Grail connections in more detail, more Downriver songs and some newly recorded stories and we will be looking at the life and work of local antiquarian and potential charlatan, Sir Glen Douglas Rhodes.
Posted by Paul Bristow at 20:30 No comments:

Captain Kidd and the Legend of the Maltese Gold 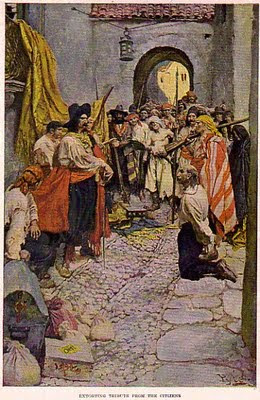 Pirate playlist...featuring classic performances from Adam Ant, Shane MacGowan and more...actually...yknow a more clever title for this post would have been "Pirate Radio"...ah well...

Posted by Paul Bristow at 20:30 No comments: 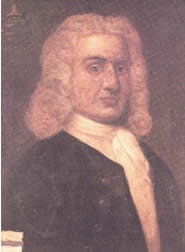 Today, on the 310th anniversary of Kidd's execution and with the compass pointing south, we set sail for merry London where from this week you can enjoy "Pirates : The Captain Kidd Story" an interactive exhibition at the Museum of London at the Docklands. Looks great.

As part of the promo for the exhibition, you can follow Kidd on Twitter, to get excerpts from his not at all incriminating logbooks and snare yourself some pirate related money off vouchers.

As a double whammy...if you are down in London enjoying the Kidd exhibition, you might want to pop over to The Science Museum to the new James Watt and Our World exhibition.

Captain Kidd and James Watt...two of Greenock's most famous sons, hitting the big time down in the big smoke. Y'know...heres a thought...HOW ABOUT CELEBRATING SOME OF OUR HOMEGROWN HEROES BACK HERE IN GREENOCK SOMETIMES!!! Dedicated exhibition, maybe even a sculpture? No...I know...lets build a statue of a dead horse instead.


I know what you're thinking...hang on…why would we want a statue of a murderer and a rogue?
Well…maybe he was unfairly tried…maybe he wasn’t guilty at all…maybe he is symbolic of a misunderstood town like . And maybe it has just slightly more glamour and history to it than say…a statue of a horse that fell off a dock and drowned, which symbolises…ehm…better health and safety practices for horses?  “ – Flogging A Dead Horse for over 500 years”?
"Ah" you say "But there's now doubt over whether or not Kidd actually came from Greenock, most folk now think he came from Dundee." Yep. And? Folklore and local tradition tell us he came from here...no one is a 100% sure that there's a big Plesiousaur swimming about Loch Ness but that doesn't plenty of people talking about it and going up to have a wee look. Have a bit of fun. Just go with it.
Besides, it’s not a statue of the historical character people would want to see…have you seen the real life Kidd? That’s him at the top of the post….not much of a looker. No…better to have a full on swashbuckling, swinging from the rigging pirate…the fictional Kidd, the folk hero Kidd…Kidd the legend.
There are plenty of examples of statues of fictional characters all over the , each a miniature tourist draw in their own right. There's the Captain Mainwaring statue in Thetford, Peter Pan in Kensington Gardens, Robin Hood in Nottingham, or my personal favourite HG Wells Martian Fighting Machine from War of the Worlds in Woking. And frankly, your life is incomplete unless you have been to The Dracula Experience in Whitby.
Yes, you’re right…there’s better things to campaign for, there’s more important things to spend money on…but in future…when we consider public artworks, when we consider keeping American tourists in the town for even a half hour longer than they might stay right now, when we want to celebrate something about our heritage which is unique and..get this…internationally recognised…how about we get behind a local hero…Captain Kidd.

Sorry. Rant over, let's all calm down by listening to this spooky pirate lullaby from The Cure's Robert Smith. 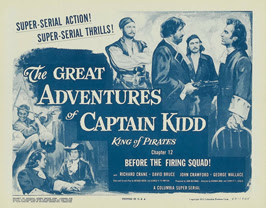 The road to hell is paved with good intentions, and also, presumably, really hot cobblestones.

It had been my intention to "hilariously" redub this full serial from 1953, and yknow...maybe next year, thats just what will happen. I'm sure it will be good.

The 15 part story is actually pretty good, being one of the few Kidd stories to address the nature of his unfair reputation. In 1697, agents Richard Dale and Alan Duncan are sent on an undercover mission by the British Fleet to find and gather information on the notorious pirate, Captain William Kidd. Dale and Duncan soon join Kidd's crew and discover, to their surprise, that the Captain is far different than they had expected.


This is episode 9 "Pirate Against Pirate"...don't worry...it's not very hard to pick up whats happening and theres more swordfights in this episode...

Posted by Paul Bristow at 20:30 No comments:

Its got nothing at all to do with this post, but he also appeared in a frankly classic episode of ghost-hunting "entertainment show"...Most Haunted. We once wrote to Most Haunted to suggest they visit the Captain Kidd Pub at the former execution dock in Wapping to hunt for Kidd's ghost. They never even replied...
Posted by Paul Bristow at 21:00 No comments: 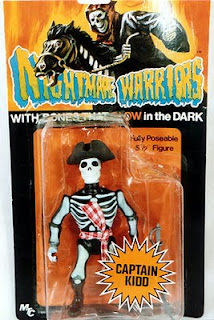 Such is Kidd's place in American mythology, that he has his own action figure...very collectible. 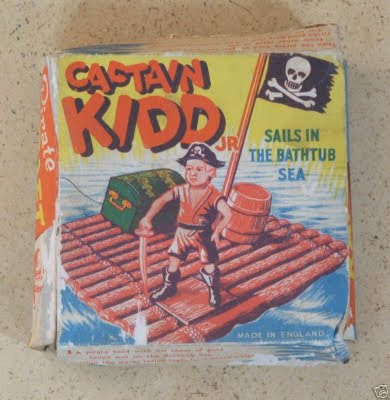 Even more impressive...is that for Superman's nemesis Lex Luthor...Kidd is ranked alongside such classic historical baddies as Genghis Khan....

And he has also been an inspiration to myopic cartoon grump...Mister Magoo...

Kidd, and in particular the enduring mystery of his treasure, have provided inspiration for many writers, both Edgar Allan Poe and Washington Irving used legends of Kidd in their gothic tales. It was these stories, part of the patchwork of new american mythology being woven, which helped define Kidd's position as a classic pirate "bogeyman". 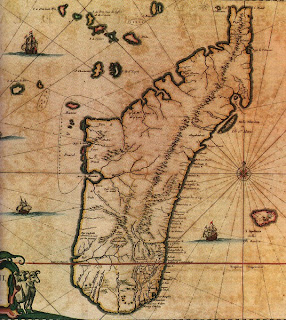 Kidd's ill gotten gains have been the subject of numerous treasure hunts over the years...but in 2007, the wreck of the plundered Quedagh Merchant was finally discovered...

Pretty exciting...but...no treasure. Still...here's what the archaeological dive team had to say on the subject...

Captain Kidd at the Movies 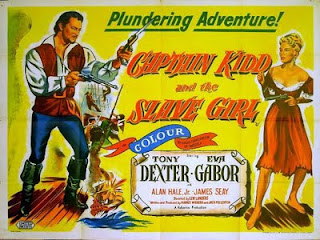 So popular is the legend of Kidd in America that it has been plundered for the big screen numerous times...though sadly, he is yet to appear in a Pirates of the Caribbean film.

Here's a clip from one of his more questionable escapades in which our bold hero goes the way of Frankenstein, Dracula and The Wolfman by tussling with Abbot and Costello...

Charles Laughton, seen here playing Kidd in this film, also played the good Captain in the original, slightly more respectable film, which you can view in its entirety here.
Posted by Paul Bristow at 21:00 No comments: 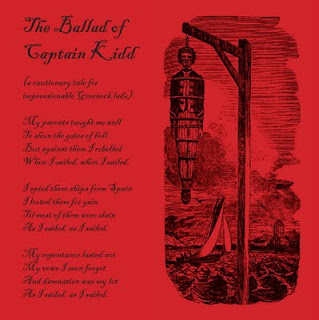 It's Captain Kidd month ALL May on Tales of The Oak...help us celebrate the 310th anniversary of his execution  on May 23rd, with all manner of Kidd malarkey including film, classic stories, comedy, music, documentary, drama and song. Yes...there's really that much stuff.

If you don't know who Captain Kidd is, or his unfortunate story, have a quick read of one of our earliest posts...Captain Kidd - Greenock Folk Hero.

Lets get the obvious bit out the way first...do we actually believe Captain Kidd comes from Greenock?
Honestly? It's not important. Did Dracula really visit Whitby? Did Robin Hood live in Sherwood Forest?
We're folklorists, and folklore and tradition tell us Kidd was from Greenock, from being mentioned in the famous ballad, to having a local descendant living here til very recently, Greenock is most definetly linked with Kidd...we just don't really care. This month, we'll try and change your mind...

First up, from the Downriver CD, a classy recording of The Ballad of Captain Kidd by Graeme McLeod, which nicely captures the resigned good humour of a Greenock man on his way to hang...

The Ballad of Captain Kidd
My name was William Kidd;
God's laws I did forbid,
And so wickedly I did,
When I sailed.
My parents taught me well,
To shun the gates of hell,
But against them I rebelled,
When I sailed.
I spied three ships from Spain,
I looted them for gain,
Till most of them were slain,
As I sailed.
I'd ninety bars of gold,
And dollars manifold,
With riches uncontrolled,
As I sailed.
Thus being o'ertaken at last,
And into prison cast,
And sentence being passed,
As I sailed.
My repentance lasted not,
My vows I soon forgot,
Damnation was my lot,
As I sailed,
Here lies William Kidd,
A hero from Greenock town
In spite of all the things he did
He never let us down
Here Lies William Kidd
Come all ye young and old,,
You're welcome to my gold,
For by it I've lost my soul,
And must die.
Take a warning now by me,
And shun bad company,
Let you come to hell with me,
For I must die.
Posted by Paul Bristow at 21:00 No comments: 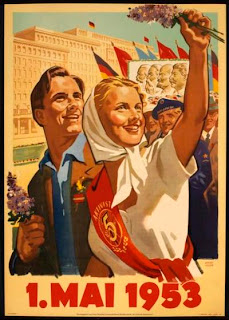 May 1st is of course a very big day in the political and folkloric calendar...you pick which is your most favouritest way of celebrating it. Or go crazy and celebrate both!

International Workers Day is generally recognised as a celebration of the international labour movement and as such has over a century of its own traditions and stories. Many of these stories and some cool banner galleries can be found here. Or here. WARNING - these pages contain politics.

The image above is from a cracking Imperial War Museum site called What Lies Beneath...which explores British experiences of the Cold War. Not very May Day I agree...but what a cool banner eh?

For the more craft minded, May Day March banners of all sorts are celebrated in the book "Banner Bright"

Before it was the festival of the international worker, May 1st was still cause for celebration and gathering together, at Beltane. It's a nice night, and there's still time for you to nip out and cut a few twigs off a birch tree for hanging above the door...and in fact if you nip along to the nearest birch tree wood with your loved one, you can kill two birds with one stone, by enjoying the other tradition associated with Beltane. (In case this isn't clear...I'm talking about "fertility rituals").

Or if you are just after some good old fashioned folk tunes..here's a nice Medieval Baebes version of Scarborough Fayre, with the (really rather sad) story explored in stained glass.

For comedy value, here is some obligatory traditional English folk dancing as enjoyed by folk group The Unthanks


And finally. May Day being associated with The Green Man is as good a reason as any to watch Simon Armitages documentary about Sir Gawain and the Green Knight...

Posted by Paul Bristow at 20:00 No comments: