For Halloween, our resident archivist Neil Bristow, delves into the dark notebooks and diaries of Sir Glen Douglas Rhodes...

A night such as tonight - when the wind rattles the slates and whistles through the keyhole - brings to my mind tales best told among friends around a warm fireplace.

But this All Hallows Eve finds me alone; a pipe in one hand and a generous dram in the other, my eyes running over the shelves, looking for a particular well-thumbed tome.

And then I hear it - the chatter of voices, and the familiar clip clop of two legged hooves, charging down the lane. An almost frantic knock on my door wakes me from my library wanderings, and draws my eye to the clock. The hour is late. But still they have come. The gang is here.

I open the door, greeted by a sight of 6 young boys, not one of them over 12 years old. And in a tradition as ancient as the oaks blowing in the wind, they announce themselves with a song.

If you’ve got no apple, pears will do,

Soul! Soul! for your soul’s sake,

Or any good thing to make us all merry.

And so for his sake, give us one.

So God may send your souls to rest.

Give us a Soul Cake and we’ll be gone!”


Their masks are crude, their guises tatty and ragged - just as it should be. I meet their ritual with my end of the bargain, distributing to them each an autumn apple from my barrel, and send them on their way into the gloomy night.

As they rattle down the lane, they give me pause for thought. They know the ritual. They know their part. But meaning has given way to indulgence, and we are perhaps all poorer for it.

They call it galoshans. But as I return to the fireside, my eyes fall on the tome I was searching for earlier and I recall the darker origins of the phrase.

They have not gone galoshans. They have gone a souling. And I read on with some hesitation; the tale of the Black Soul Gang….

Long ago, not too far from the cobbled streets of Greenock (or perhaps further than the tale recalls), there was a village high up on the moor. Here the old folk might still recall, if asked, the tale of Old Tam Cole, or the Bell That Rings Neath the Knowe. Good tales for telling, but neither as somber as the most well known fable in village - that of the Soul Gang.

In those days, on All Hallows Eve, Soul Gangs would go from farm to farm performing the souling plays of old, begging as they went for ale and the odd morsel of food. A favorite of this particular gang was the death and resurrection play, of which I recount a small excerpt for your amusement.

"We are one, two, three good hearty lads, and we are all in one mind, we have come a-souling , good nature to find,

And if you will give us one jug of beer, We will not come a-souling, till this time next year.

Step down in your cellar, and see what you'll find,

There is ale, rum, gin and brandy, and all kind of wine,

And if you will give us one jug of beer,”

We'll not come a-souling, till this time next year.”


Now on one particular occasion, they came to the door of Old Farmer Lindsay.

The gangs chief banged heavy on the door, ringing his bell and announcing himself;

'Open this door and let all our brave and gallant actors in,

On my shoulder I carry a club,

In my hand a dripping tin,


Lindsay, a superstitious man was known for his miserly ways, and when met with boys of the Soul Gang, he parted with tradition and parleyed their chorus with a heavy slam of his farmhouse door.

Not content with this response, the Soul Gang took their vengeance - sneaking into Old Lindsays barn, they helped themselves two a barrel of cider. A breach of the ancient rules of Soul Gang - they had taken what was not freely given, and had damned themselves in the process.

A broken bargain on both sides is ill for all parties; and as they made their way across the moor, the wind whipping their ragged guises, they may not have heard old Lindsay whispered a curse upon them; “if they take something of mine, I shall have something of theirs."

And cursed they were. For as the hour waned, one by one the boys of the Soul Gang found themselves lost in the mists of the moor. And with each step they took, they wandered further from the path. Calling out to one another, they tried in vain to find their way; but slowly, and with a somber inevitability, one by one they were lost to the mire.

In years to come, villagers would not venture out along on All Hallows Eve. And all among them would swear that when the mist descended upon the moor, and the air was silent and still, you could hear the ringing bells of the Black Soul Gang; seeking their way back from the hinterland; a warning to keep trust with tradition, lest you loose your soul and perhaps more.

I closed the tome, returning it to its rightful place on the shelf. And as the last embers of my fire dimmed, I was sure I could hear the faint sound of a bell, carried on the mist.


We hope to see you out and about going your Galoshans this year - and enjoying the weird wonders of the new Galoshans Festival.

Magic Torch will have some short films and recorded stories playing in The Dutch Gable House, where you will also find exhibitions by Maria McCavana (in the Green Room) and Stephen Hurrell (in the Back House). Stephen's exhibition ‘Beneath and Beyond: Seismic Sounds’ is a live sound installation about the constant movements and tectonic shifts beneath the earth’s surface.

As a special Galoshans treat, all Magic Torch comics, books and graphic novels will be £3 each or 4 for a tenner! Available exclusively from The Dutch Gable House Shop.

And of course you can also get your hands on Andy's very limited edition 'Mary Lamont' artwork. 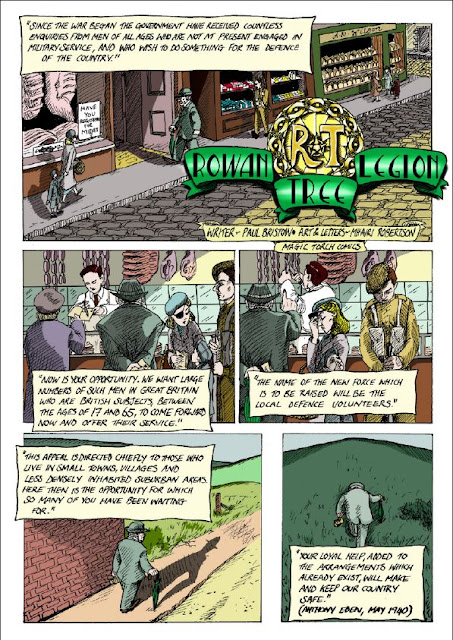 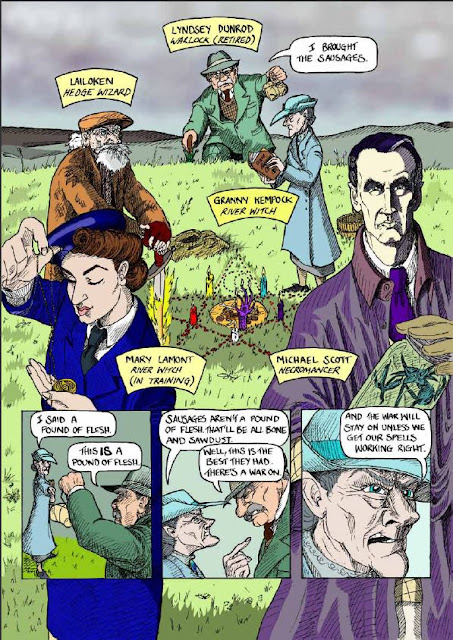 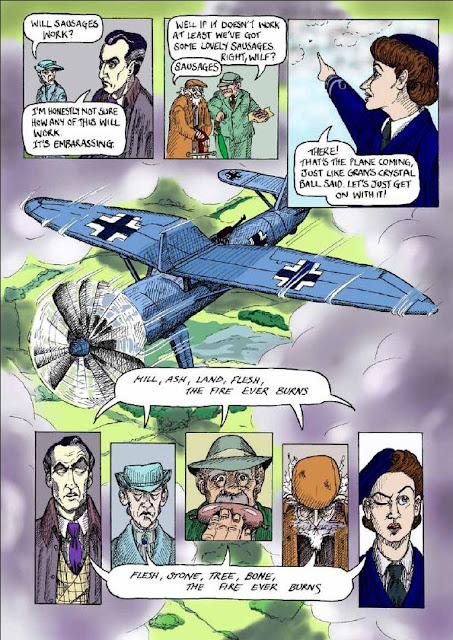 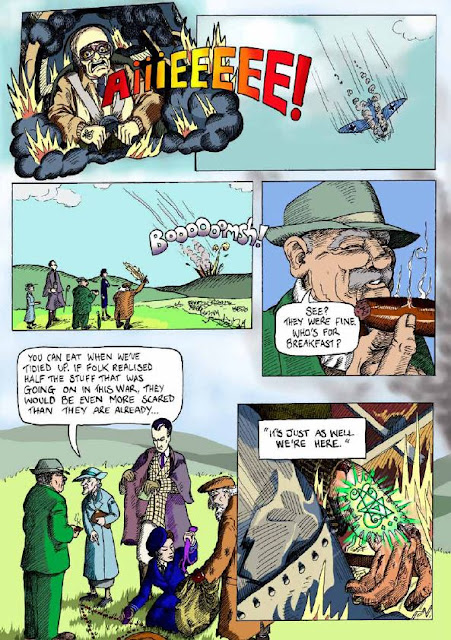 Rowan Tree Legion - The Skeleton Key, is our new all ages comic, due out next year. Sort of "Dad's Army with witches". It does feature some characters and places from Inverclyde, but also from all across Scotland. We thought we'd share the first few pages as it's the Season of the Witch and all that. The full 48 page epic will be along next year featuring gargoyles, nazis, seamsters and gigantic scary crows...

UPDATE - You can now check out the cover online

Artwork is by the smashing Mhairi Robertson, who you should totally follow on Instagram - she's been doing some sterling work for the Inktober 2015 challenge. Mhairi has also produced some exclusive artwork for our new The Wonderful Worlds of Alice project...here's a wee sneaky peak of some of that artwork too....

Fifteen Years of Folklore and Fear 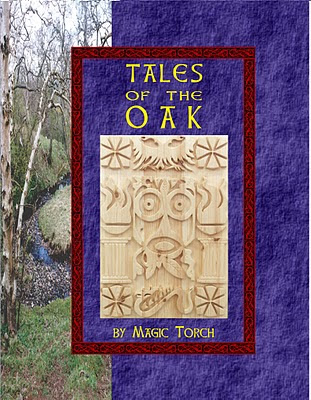 Magic Torch turned 15 last year, but this month, this week in fact, it's been 15 years since we published our first book, Tales of the Oak - which has pretty much been the foundation of everything we've worked on ever since.

Tales of the Oak collected a whole range of local folktales and half remembered legends, which had more or less fallen out of the telling, and presented them back to everyone to bring them back to life. We did actually have a plan when we did this, and it was to create a sort of "mythical" history and backdrop to what is often viewed as a fairly miserable and depressed community. Taking genuine local stories, national legends and a wee bit of creative license, we tried to make our hometown seem a little more magical. The stories could all be read and told independently, but read cover to cover, there is also an ongoing story.

The first 1000 copies of the book sold out within four weeks - quite literally outselling Anthea Turner's autobiography five copies to one in the Greenock WH Smith. Crazy times. Hilariously though, in our rush to get them into local bookshops, the glue bind hadn't properly set, and the first 50 copies fell to pieces. Bookpoint were very understanding about that. If you still have one of those faulty copies, it's really extra rare. Largely unreadable, but rare. Sort of like the dead sea scrolls.

We've reprinted the book a few times, thousands of copies have now been sold. And yknow, it's still available if for some bizarre reason you don't already have one...both in our online shop, via the Dutch Gable House and also for kindle. It is of course, ideal Halloween reading.

Here's the original founding members of Magic Torch below, promoting Tales of the Oak in the Tele in October 2000. We look like a terrible indie band. Or a sort of low rent Travis. Which is actually exactly what we were going for...

Email ThisBlogThis!Share to TwitterShare to FacebookShare to Pinterest
Labels: folklore, magic torch, tales of the oak 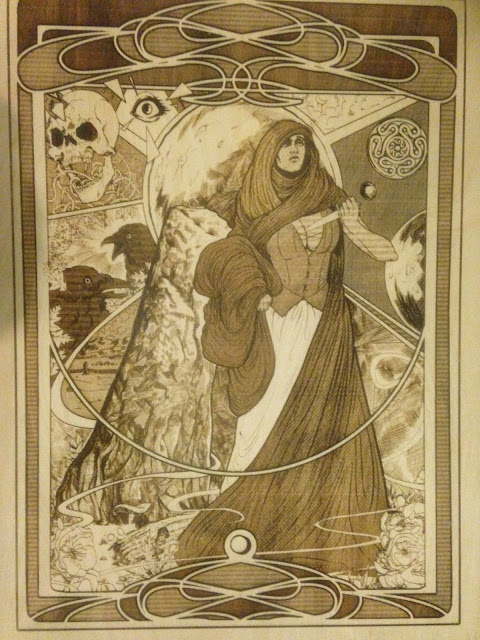 This rather awesome piece of artwork by Andy Lee, has been laser etched into wood. It features a reimagining of Mary Lamont, the young Inverkip girl who was executed as a witch during the areas infamous witch trials.

Copies of this limited edition print, created for Newark Products, will be available exclusively from The Dutch Gable House shop during the Galoshans Festival later this month.

From next week, the Dutch Gable House shop is open from 10 - 4 Thursday, Friday and Saturday until Christmas.

Here is the original lineart Andy produced for the piece 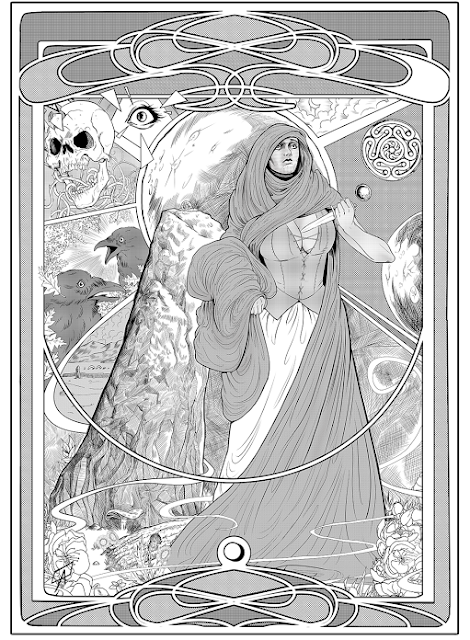 If this has inspired you to stage your own Witch Trial, perhaps giving it a happier ending, why not download our Everyman play The Orchard, based on the Renfrewshire Witch Trials...
Posted by Paul Bristow at 10:00 No comments:


It's your two week warning for essential folk play preparations!

This year, Inverclyde is actually having a whole Galoshans Festival, with all sorts of weird, wonderful and unusual stuff going on in and around the town. Check out the programme. We'll be along at The Dutch Gable House during the weekend.

And once you've had fun at the festival, be sure to be Going Galoshans and performing your own version of the traditional play which has inspired the festival....

Read and download The Galoshans Play for free via Scribd

And you must check out the Guising and Galoshans resource pack from the lovely folk at the Scottish Storytelling Centre, which has scripts, songs and games for you to use.


For other Halloween and Galoshans related fun...

See a version of the play recorded in The Dutch Gable House for Inverclyde TV...

Read about Greenock's other Halloween Traditions


Listen to our popular spooky tale Malkie and The Bogle....


Enjoy an illustrated reading of The Ballad of Auld Dunrod...


And finally, below is a wee sinister glimpse of Andy Lee's reimagining of the traditional play characters for a folk horror comic based on the play, which is in development at the moment... 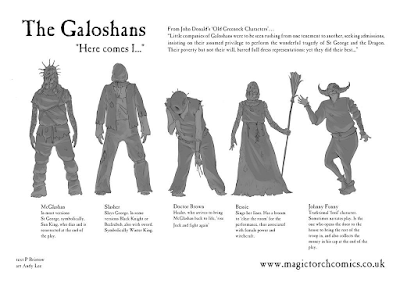 Posted by Paul Bristow at 12:38 No comments: