The Fisherman and The Monkey

Tales of the Oak - Digital Art 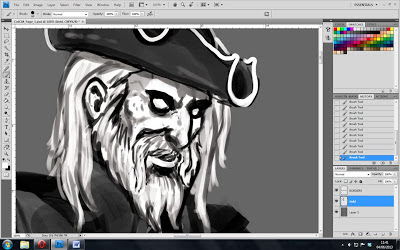 That's all the pages scripted for our Tales of the Oak comic, and Andy's working away so we can hit our deadline - we'll be launching the comic in September on Inverclyde's Doors Open Day this year.

There's a broad range of stories in there, from adaptations of some classic tales and ballads, to stories inspired by more recent and urban folklore.

You've already had previews of our Slenderman and Green Oak Trees strips, but there's 64 pages of terrifying action. Meantime, here's some more of what Andy's been up to... 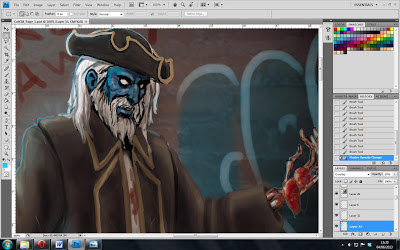 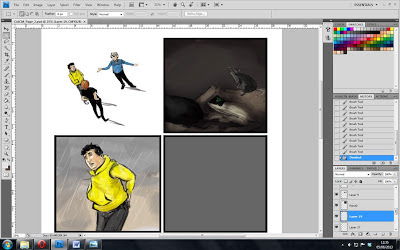 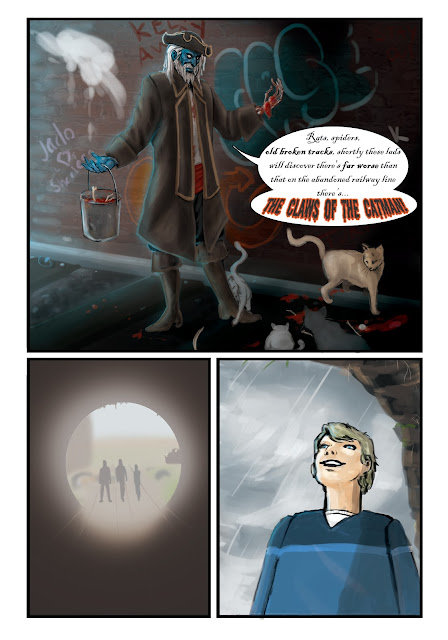 Posted by Paul Bristow at 08:30 No comments:

Email ThisBlogThis!Share to TwitterShare to FacebookShare to Pinterest
Labels: captain kidd, catman, tales of the oak 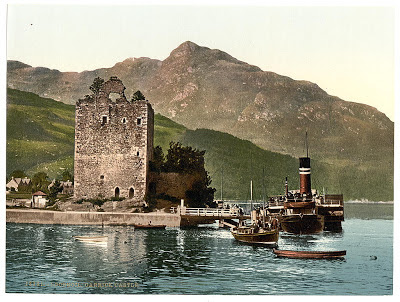 One of the traditional songs that was never recorded for the Downriver CD, there's echoes of the nonsensical lyrics of The Irish Rover there. Ripe for reinterpretation...

Noo Katey she’s as fine a ship
As ever yet was rig
And when she’ll cot her mainsail up-
Cot! You’ll took her for a prig 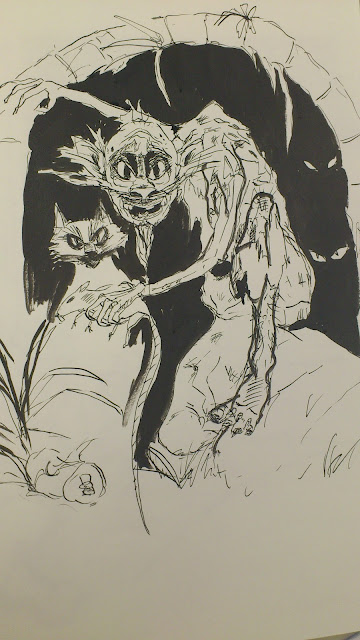 Originally, our new book Wee Nasties featured a verse about local legend the Greenock Catman, but in the end, he didn't quite fit. Of course, we are all big fans of the Catman and wouldn't want to be offending him, so we thought we'd print Mhairi's rough draft sketch and our verse on the blog.

A much friendlier version of the Catman appears in the childrens book I've written The Superpower Project, which is published by Floris Books in February 2016.

Down the track’s a Catman
Who has rats on toast for tea
He never cleans his teeth
Or has a bath like you and me.
He lives in an old tunnel
That runs below the town
And if you’re down there playing
He’ll come up and pull you down.
He’s never very lonely though,
His friends are all lost cats
So if a kitty’s missing
They get share of Catman’s rats.


Over 500 copies of the book have been distributed so far, we've kept a few copies back for another opening of the exhibition over the summer months. There was a smashing wee piece on the launch on your local tv channel Inverclyde TV.

There’s a poor wee frog lurking in some of the pages of Wee Nasties, he ended up trapped in a jar by Auld Dunrod. Happily, though, he escapes. Maybe you can tell us what happened to Dunrod’s Frog when he escaped.

Did he meet even more nasties? End up as frogs legs on toast? Or maybe there’s a much happier ending....

Why not try telling us what happened in less than 200 words, and you can win a prize.

The top 5 entries will be printed on the Magic Torch blog www.talesoftheoak.co.uk, with the overall winner receieving a framed print of one of the Wee Nasties signed by the artist Mhairi M Robertson.

Your entries can be posted to

Competition open to all under 12s and the closing date for entries is 26 June 2013. 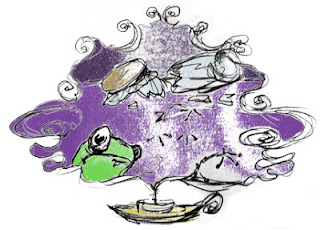 There's a new facebook page, Keep Corlic Wild, raising awareness of the plans for a 70 meter meterological mast which many believe will have a detrimental impact not only on the local landscape, but also local archaeology relating to local Roman sites. The mast will monitor conditions for a proposed wind farm. The page explains some of what has happened in other areas during wind farm construction and also explores the company ultimately behind the proposal.

A planning application has been lodged with Inverclyde Council, you have until this Friday, June 7th, to add your comments to this proposal.

Often, as we've seen before, objections to such plans and schemes are decried as getting in the road of "progress"...more accurately, "profit", still the basis of so much regeneration and sustainability planning, something even Unesco World Heritage Sites like Edinburgh Old City struggle against. Or it could be, that you feel wind farms are a fact of life we all have to accept, in the same way as the railway once was.

Torch are not directly involved with this particular Facebook campaign, but we certainly recognise its concerns.

For more on the archeology and Roman heritage of the area, you can read a survey produced by one of the members of the protest group based around Lurg Moor or read some of our own research.
Posted by Paul Bristow at 11:16 No comments: