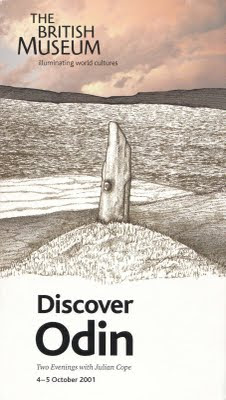 Discover Odin is an album and booklet written by Julian Cope and released in a limited edition in 2001. It was produced in collaboration with the British Museum. It comprises a mixture of musical and spoken tracks.

In this first track, "The 18 Charms of Odin", Cope provides musical accompaniment to the text of the epic Norse poem Hávamál, in Kevin Crossley-Holland's version, as published in The Norse Myths.

Today, a Viking Rock face off. Led Zep's "Immigrant Song" versus Black Sabbath's "Tyr".
In case its not immediately obvious, these are both songs about Vikings.
Get yourself down to Largs today, for the start of the Largs Viking Festival

At the risk of offending anyone...this is a really easy fight for Led Zep...Tyr's a wee bit silly...
Posted by Paul Bristow at 10:00 No comments:

﻿ ﻿ To celebrate the Largs Viking Festival, we're going to have a few weeks of Viking Related mayhem. Vikings have of course left their mark all across Britain, they apparently even managed to attack London Bridge at one point. But what's their connection with the West of Scotland?


Gall-Gaedhil
According to the early Viking sagas, the outer islands of Scotland were conquered by Ketil the Flatnosed, a great warrior who had gained fame and fortune in Iceland. He created a network of peace alliances throughout Scotland and Ireland, and the many warriors he brought with him soon began to marry and settle with locals. This led to the creation of the so-called Gall-Gaedhil, or foreign Gaels, a Viking led warrior force who adopted Celtic culture and operated mainly on the west coast of Scotland and the north of Ireland. These fierce Celto-teutonic warriors seemed to be under Ketils command and seem to have been instrumental in giving the Vikings a foothold in the Scotland and Ireland. However, for reasons unknown, Ketil and most of his family returned to Iceland, taking with them across the seas many elements of Scottish culture. But Ketils son in law Olaf remained and none were as fierce as he in their subjugation of the Celtic lands under Viking control.
Olaf the White
In 853 Olaf the White arrived in Dublin and he and his ally Ivar took control of the Norse settlement there. Olaf  and his son Ivar's ambitions went beyond plunder to conquest and political control with the founding the Kingdom of Dublin. Over the next fifteen years, the Dublin became one of the most successful of all the Viking settlements in Britain, and Olaf began to cast his eyes further a field to the rich and prosperous Kingdom of Strathclyde. The Clyde and her islands represented a means of linking the powerful Viking strongholds of Dublin and York, further strengthening the Norse foothold on the British isles
Vikings on the Clyde
After a series of preliminary raids against the firth of the Clyde, in 870 Olaf sailed up river with a fleet of 200 Longships, laying siege to the capital of Strathclyde, Dumbarton. Olaf was accompanied by Ivar One Legged, and his host of fierce warriors, fresh from their capture of York. For four months, the Viking invaders surrounded the rock, but were unable to penetrate its defences. Only when the well inside the walls dried up, did the Norsemen finally gain their victory at Dumbarton as "they wasted the people who were in it by hunger and thirst". Once the rock was seized, the invaders plundered and destroyed it, taking "all the riches that were within it and a great host of prisoners were brought into captivity. The Vikings left as swiftly as they arrived, their fleet carrying back to Dublin the rich treasures and proud sons of the now fallen Kingdom of Strathclyde.
Hogbacks
The Viking destruction of Dumbarton did not represent the end of the Norse presence on the Clyde. Today, one of the most enduring monuments to the Scandinavian presence on the Clyde is the collection of mysterious so-called Hogback tombstones which are displayed at the Old Govan Parish Church. These carved stones are found in clusters, mainly on the estuaries of the Clyde and Forth, and are thought to have been an invention of Irish settlers, influenced by Teutonic carving styles. The Govan collection is the largest in Scotland, consisting of five stones, all of which have animal carvings on them. One theory suggests that after the destruction of Dumbarton, Govan took over as the royal centre for Strathclyde, within which a stone carving school may have developed, drawing upon techniques developed by Viking settlers. There are even hints that the stones may represent an even closer bond between the Kings of Strathclyde and the Norse nobles, possibly even ties of blood or marriage. However, for now the stones remain silent about their mysterious origin.
The Viking Legacy
The countless Viking raiders and settlers, who came to these shores, left a permanent mark on the landscape and culture of Strathclyde.  We have today many place names on the north and west coasts which are a testimony to the thousands of "Wolf-coats" who braved the fierce oceans in search of new lands. Nom, the old language of the Islands has its roots in Norse and was still found to be spoken in some isolated areas up until the 18th century. It is all true to say that Norse found its way into the Scots dialect, and runic inscriptions formed some of the earliest script used within Scotland. It is ironic then, that a culture often perceived as intent on destruction, should have left behind such a rich legacy, which includes the enduringly mythical image of the Viking warrior that to this day continues to have a powerful affect on the imagination.
(article Neil Bristow)

Posted by Paul Bristow at 20:00 No comments: 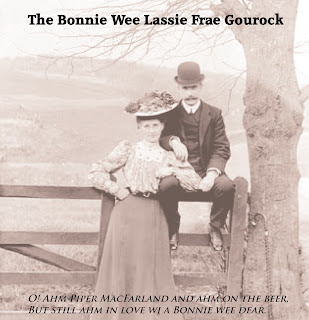 Sticking with our Gourock theme, here's what can only be described as "a music hall classic", made famous by Belle Stewart. It is actually a Harry Lauder song called "Piper MacFarlane".

The frankly fantastic oral history archive Tobar an Dualchais notes that  "The words were written by Lauder and Gerald Grafton, to music by Lauder, published and recorded for Pathé in 1906. Both MacColl & Seeger (in 'Till Doomsday in the Afternoon', 1986, pp. 262-264) and Geordie McIntyre (in his notes to 'Belle Stewart: Queen Among the Heather' CDTRAX9055, 1998) note that Belle learned the song from a broadsheet, from The Poet's Box in Dundee."

The song details Piper MacFarlanes "comical" courtship of a young Gourock lass, presumably there is a verse missing detailing a visit to Cleats and the Cafe Continental.

BONNIE WEE LASSIE FROM GOUROCK
O! Am Piper McFarlane and A’m on the beer
But still A’m in love wi’ a  bonnie  wee dear
Ye’d like her yersel’ if ye only could see her
Her father’s the grocer in Gourock
The first time I met her I’ll never forget
The rain it was raining the weather was wet
I kissed her and told her that she was a pet
This bonnie wee lassie frae Gourock
CHORUS
O! she’s a bonnie wee beautiful thing
I’ve popp’d her the question and bought her the ring
A’m goin’ tae get married sometime in the Spring
But I dinna like to askin’ her faither
O! I took her tae I did by the by
Tae spend a few days wi’ my auld freen’ Mackie
Mac “Who’s the lady?” “D’ye no ken?” said I
“That’s the bonnie wee lassie fra Gourock”
Mac started to tickle her under the chin
When who but his wife Missis Mac should come in
She shifted his whiskers and half o’ his chin
Thro; this bonnie wee lassie fra Gourock
CHORUS
O! I borrow’d twa pounds frae my auld freen Mackie
And I took my wee sweetheart to dine at the Cri
When a masher he started a winkin’ his eye
At my bonnie wee lassie frae Gourock
Her temper it rose she fair played the deuce
She walloped his neck wi’ the leg o’ a goose
She hunted the masher all over the hoose
“Twas a glo-rious vict’ry for Gourock
CHORUS
O! I bought my wee lassie a nice bit of lace
And a hat and some powder tae puff on her face
We caused a sensation all over the place
Me and my lassie frae Gourock
I treated her handsomely just like a swell
Took her roon’ tae the back o’ a first class hotel
Put her nose tae  the window to smell the nice smell
She’d ne’er smelt a smell like it in Gourock
CHORUS
Posted by Paul Bristow at 13:57 No comments: 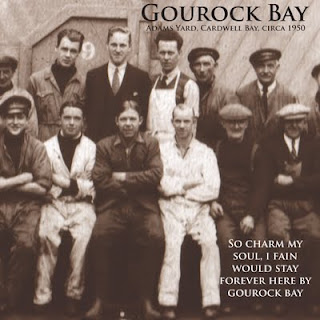 This version of the poem An Evening in Gourock Bay was recorded by Marky Boy of Destiny.

For a classic exploration of Old Gourock, check out Inverclyde Council's free download of David McCrae's "Notes About Gourock". Definitive.

We've been transferring the songs from the Downriver CD onto a page on soundcloud, you can listen to all the tracks so far.

Our Sugar Sheds campaign also has a soundcloud page for local performers to share their versions of Celebration Ode, also worth a wee listen.


(Evening In) Gourock Bay
“Tis gloaming’s hour and Gourock Bay
From purple turned to darker grey
Reflects the stately yachts that ride
Secure upon the rippling tide
The long pier stretching to the west
Folds Clyde’s swift argosies to rest
And higher lines of twinkling light
Like strings of jewels charm the night
Music and love and laughter seem
To throb along each twinkling beam
For every light a story tells
Of homes where peace abiding dwells
Above the craigs the rising moon
Lifts her bright ample shield and soon
The bay returns her silvery sheen
And faery glamour holds the scene
A silver path divides the sea
And Fancy walking there full free
Comes to a place on swiftest feet
Where surely earth and heaven meet
The restful scene fair Luna’s light
The balmy airs the quiet night
So charm my soul I fain would stay
For ever here by Gourock Bay
Posted by Paul Bristow at 19:00 No comments: