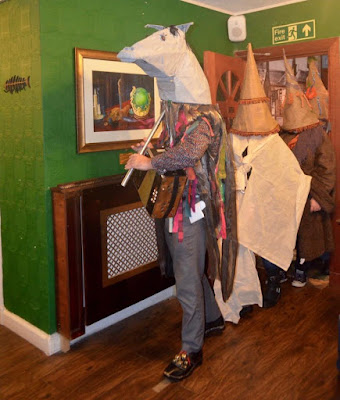 Guising, trick or treating, down our way in Inverclyde, it’s “Going Galoshans”.

Many of the traditions which were observed for decades before falling out of fashion were in fact brought down with Highlanders fleeing the clearances, or came over with Irish migrant workers. These traditions and many more are recorded in John Donalds “Old Greenock Characters”.

"In the early part of the evening the streets were thronged with children, bands of them, mostly girls, singing in chorus;

Hallowe’en, a nicht at e’en

Three witches on the green
One black, one white
One jumping ower a dyke

After the dooking for apples came the burning of nuts. Two nuts are placed in the fire side by side, one for a lad and one for a lass. Should they burst into flame and glow quietly together, the omen is favourable; but should they spring apart trouble is portended, and the course of true love will not run smoothly.

A three footed pot filled with champit tatties was placed in the middle of the kitchen floor. Mixed with tatties were a ring, a doll, a thimble, a button, and a threepenny ‘bit’ betokening respectively that the finder would be soonest married or a parent, remain an old maid of bachelor, or acquire riches. The guests were then seated on stools  around the pot , each armed with a spoon , and at the word ‘go’ an onslaught was made on the tatties."

People are now less likely to set fires to burn nuts, but the tradition of “going Galoshans” around the doors, performing and collecting sweets, remains the most popular part of all Halloween celebrations. It is the part of the tradition which was popularly transferred to America when those same migrant workers and highlanders left these shores.
In the nineteenth century, The Galoshans Book was a chapbook printing of a short play based loosely on the legend of Saint George and the Dragon, more traditionally performed by mummers. Children would dress up and travel from house to house performing their interpretation of this play, it is from this that we derive the term “going galoshans”

"Little companies of Goloshans, too, were to be seen rushing from one tenement to another, seeking admission, sometimes indeed insisting on their assumed privilege to perform ‘The Wonderful Tragedy of St. George and The Dragon’.
Their faces were fearfully camouflaged, and their ordinary garb was embellished with various coloured trimmings, and a wooden sword where required. The kitchen floor was the bloodless scene of many an encounter with such swords, but all ended happily; for when ‘Dr Brown, the best old doctor in the town’ administered to the slain hero his marvellous life-restoring potion saying ‘Rise, Jock, and fight again!’ everyone was highly gratified, including the actors – if the collection was satisfactory.” 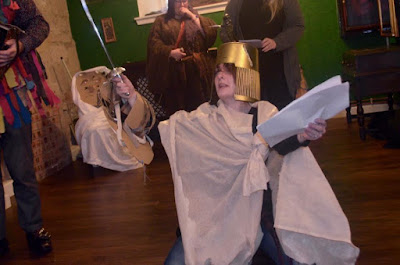 In his study of mumming plays, EK Chambers notes a number of regional variants, including this apparent explanation for why our play is Galoshans.

"But the chief feature of the Scottish versions is the regular replacement of St. George by a hero called Galatian, Galations, Golashans, Galacheus, or Galgacus. Presumably this last is the original form, since Tacitus makes Galgacus or Calgacus the leader of the Picts in their battle with Agricola at the Mons Graupius. Irish versions naturally introduce St. Patrick, with a gibe in which St. George is called St. Patrick's boy."

The full text of  E.K. Chamber's "St George and the Dragon : The English Folk Play" 1933 can be read here. It is a fascinating (and very thorough!) look at how mumming plays across the United Kingdom have been performed, adapted and recorded across the centuries, from harvest ritual to fertility festivals through to Christmas celebrations and arguably into pantomime.

In recent years, the tradition of referring to Halloween as "Galoshans" has been revived in Inverclyde, with local school Aileymill Primary taking the lead. It has also been the inspiration for an arts festival. 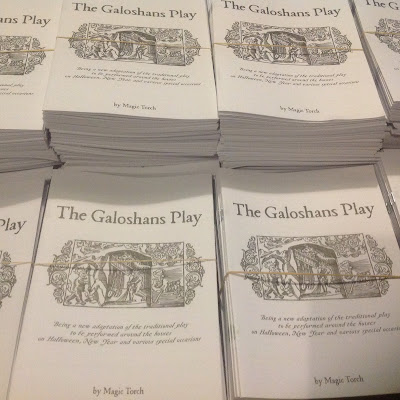 In 2016, Magic Torch received funding from Heritage Lottery Fund Scotland to help revive the tradition of performing the Galoshans Play. Over 6000 free copies of the play were distributed to local primary schools, and a new volunteer troop of Galoshans were trained by Stan Reeves and Shane Connolly of Sokobauno Theatre.

You can download your free copy of the play from our ISSUU page.

Film maker David Newbigging followed the progress of the project for us, and you can see two videos below showing the schools work and also a performance of the play at Greenock Central Library during the Galoshans Festival.