The Curse of Crow Mount 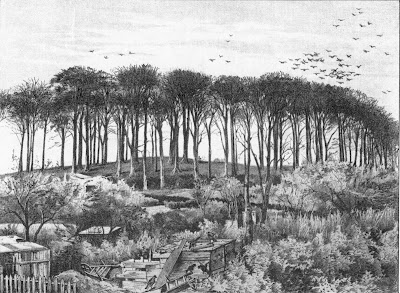 An ancient and mysterious portion of Greenock, Crow Mount, or as it was commonly called, The Mount, formed that part of the town stretching westwards from Bank Street to Ann Street, and running northwards from Dempster Street to Roxburgh Street. Rumour has it, that this was once the haunt of witches, who held covens there, far from the watchful eye of the townsfolk. Later still it was said that a witch was hung from one of the same trees and that as she choked she forever cursed the ground beneath her dangling feet and the forest all around. By the 1800s our town ancestors had long since abandoned the mount to the Crows. Historians remember it for its lush greenery, a stark contrast to the smoke and industry already taking hold at the rivers edge. But the story goes that from branch to root those trees hid a darker tale.

In 1513, the Lords of Greenock assembled the townsmen to march with King James against the English. On foot all the way to Northumberland, the men walked to the beat of the ancient town drum. Some say that this drum had been framed with wood from Crow Mount. Whatever the case, it is true that when disaster struck, and the Scots were crushed on the fields of Flodden, few returned to the town. But those that did, brought with them that same drum. And here it remained, a memory to the ghosts of Greenock’s fallen.

For over 300 years, the drum was kept safe by the townsfolk, seldom heard, save for the odd ceremonial occasion. One historian recalls that by the 1850’s it was gathering dust, it’s proud history all but forgotten. It was a fate shared by one lonely townsman of the day. Archibald Weir, a resident of Crow Mount had fought in Crimean War alongside Sir Shaw Stewart. Injured in the siege of Sevastopol, Weir returned home, bitter and haunted by his experiences on the battlefield. Hard on his luck, he took to petty crime – picking pockets mostly. So it was that one day in the Coffee Rooms, his eyes fell upon the old town drum. “A drum like that might fetch a pretty penny in the markets of Glasgow” thought Weir.

And so that night, he returned to take the ancient drum for himself. Climbing the hill to Crow Mount, he rushed home to hide his stolen prize, planning to fence it the next day. But an uneasy sleep awaited him. Nightmares of wars and witches awakened him.And all the time, ringing in his ears, the endless beat of a lonely drum; The Greenock Drum. On and on it went. Thump. Thump. Thump. The drum would not be silenced.

The next morning the town awoke to the news that Weir’s lifeless corpse had been found hanging from the oldest tree on Crow Mount. The drum was nowhere to be found. Was it some witches curse come back to haunt Crow Mount, the ghost of one of Floddens Fallen? Or simply a poor soul, driven mad with guilt?

Shortly after the grim discovery of Weir’s body was made, the trees of Crow Mount were cleared to make way for the Mount Church. And those same trees were used to make some of the pews. But superstitions die hard, and all refused to sit on them. So as you walk the streets these winter months, listen carefully for the beat of the Greenock Drum, and the whispered curse of Crow Mount.