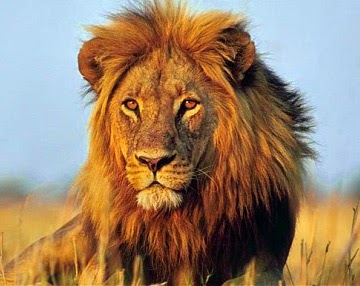 LION, it is said, was ill, and they all went to see him in his suffering. But Jackal did not go, because the traces of the people who went to see him did not turn back. Thereupon, he was accused by Hyena, who said, "Though I go to look, yet Jackal does not want to come and look at the man's sufferings."

Then Lion let Hyena go, in order that she might catch Jackal; and she did so, and brought him.

Lion asked Jackal: "Why did you not come here to see me?"

Jackal said, "Oh, no! when I heard that my uncle was so very ill, I went to the witch (doctor) to consult him, whether and what medicine would be good for my uncle against the pain. The doctor said to me, 'Go and tell your uncle to take hold of Hyena and draw off her skin, and put it on while it is still warm. Then he will recover.' Hyena is one who does not care for my uncle's sufferings."

Lion followed Jackal's advice, got hold of Hyena, drew the skin over her cars, whilst she howled with all her might, and then put it on and was better.


Magic Torch are sharing Commonwealth folktales as part of the 2014 Commonwealth Games celebrations. In addition to publishing a book and comic, which retell some commonwealth tales, we are also sharing traditional tales on our blog. We are presenting the stories exactly as collected, without editing or rewriting. Some of the tales have been recorded recently, others, many years ago in traditional forms, more often than not using dialects and local mannerisms - the "voice" of the people telling the tales. We have opted not to change this.

The Herald and Sunday Herald Children of the Commonwealth series will run over the coming months as the Queen's Baton travels the world on its way to Scotland. As well as bringing readers inspiring stories from key locations on the baton route, it is also raising money for UNICEF, an official charity partner of the 2014 Commonwealth Games in Glasgow.

There are a number of different ways to donate: you can call 0800 044 5777; or you can click on unicef.org.uk/herald; or you can text 'CHILD' to 70111 to donate £3. UNICEF is the world's leading children's organisation, working to save and change children's lives.
Posted by Paul Bristow at 13:00