Blood on the Clyde 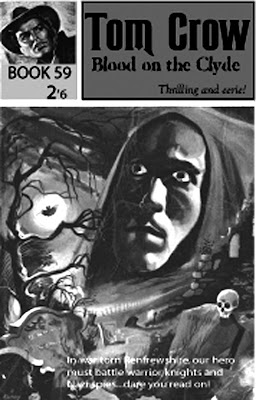 Following many requests for further information regarding our post "Nazis Attack Greenock In Search of Holy Grail", we here present a pulp adventure based on the supposed local exploartions of Nazi archaeologist Otto Rahn. But how much basis is there in fact for The Clyde's Templar and Grail connections...find out over the next month....meantime enjoy an exciting adventure with Tom Crow...

Tom Crow Book 29  The Secret of the Templars
Chapter 4 – Blood on the
Tom travelled up from , the nightmarish howling of those mysterious black dogs still echoing around his mind. What was Eros playing at this time? What had been the meaning of that bloody sigil scrawled onto the turret wall? Tom’s mind raced and clattered almost as if in time with the train. By the time the carriages pulled into he was no nearer the truth.
Tom was met on the platform by one of the agencies local operatives, Marianne, a member of the Free French. She in turn had directed him to the parish priest in . After a friendly dram, the priest told him where to meet his next contact, the Bogle Stone; a huge rock perched at the top of the town, believed by locals to be haunted by an evil spirit.
The rain lashed down on Port Glasgow, as Tom approached the stone. A shadow moved from behind the rock.
“Tom Crow?” asked the shadow.
“Sometimes.” answered Tom, “Depends who’s asking.”
A young man stepped from behind the stone, hand extended.
“Shaun O’Donnell, I was told to meet you here.”
Tom eyed him suspiciously.
“Et in arcadia ego..”
“The shepherd must stay with the flock.”
Tom smiled and shook Shaun’s hand.
“Sorry about that. I know codes are all very tedious and embarrassing. But loose lips and all that.”
“Nae problem.” said Shaun  “ be too careful. C’mon. This way.”
Shaun gestured to a battered looking jeep at the side of the road.
“Ahm afraid it’s a bumpy ride pal.”
“I wouldn’t have expected anything else” said Tom.
The jeep sputtered into life and the two headed off towards the gloomy moorland.
“Where are we headed?”
“There’s a ruined monastery up at . Cistercian.”
“The religious wing of the Knights Templar?”
“Aye.” said Shaun “The whole area is surrounded wi’ Templar sites. A lot of the smaller villages back here were actually founded by the Templars.”
The lightning flashed again, briefly illuminating the treacherous road as it stretched far off into the dark of the trees.
“So why this particular site?” asked Tom.
“Jist a hunch really. See, wan o the monks kept a really detailed chronicle o’ the daily events of the monastery.”
“I bet that’s a real page-turner.”
“Yer naw kiddin’. In fact, the most interestin’ thing aboot it, isnae whit’s in it. It’s whit isnae.”
Tom frowned.
“I’m sorry you’re going to have to repeat that.”
“Most scholars who look at the Houston Chronicle agree that there’s aboot half a dozen pages missing.”
“Someone stole these pages?”
“Mebbe.” Said Shaun “But the other thing the scholars are fairly sure aboot, is that the pages were removed not long after it was bound.”
“So…”
“So if somebody did steal the pages, they did it in the 13th Century.”
The van lurched as Shaun swerved to avoid a fox.
“What’s so important about these pages?” asked Tom “Isn’t it possible that it’s just six more pages of ploughing parables and fancy handwriting?”
“Oh aye.” Said Shaun “It’s possible. It’s jist no very likely. See the mistake that whoever removed the pages made not tae read the entire manuscript.”
“Let’s not be too hasty to judge them.” said Tom, “Have you ever read an entire medieval manuscript?”
“Oh it wid rip yer knittin’.”
“Yes. Quite.”
“Anyhow, further on in the chronicle, the monk makes a few references to the pages that were later removed. They concerned the visit of an excommunicated Templar Knight and a great secret.”
“What secret?”
“Dunno.” said Shaun “Big enough for the pages to get taken oot the book.”
“It’s intriguing I agree.” said Tom “But it’s not much for us to go on.”
“Ah but ah huvnae finished.” said Shaun “A professor up at told me aboot a few other Cistercian manuscripts wi’ similar gaps in them. It quite common practice apparently.”
“Medieval censorship?”
“Naw. Pages were often removed for safety. See, the secret wisnae so much whit written on the page, as the pages themselves.”
“Coded messages.” said Tom.
“Exactly. Ye’ve come across this before?”
Tom nodded grimly.
“In the 30’s I pursued a Nazi treasure hunter named Otto Rahn through the south of ,” explained Tom “The whole area is a tangled web of Templar sites. And every secret, every clue was encoded into old tombs, paintings, sometimes the very landscape itself.”
“Aye. Sacred geometry. Did ye catch this Nazi?”
“No.” said Tom “I didn’t even manage to figure out what he was looking for. It was a disasterous mission, for a lot of reasons.”
Tom’s eyes darkened, remembering Sylvia’s pleading face as she slipped from his grip and down onto the rocks below. (SEE TOM CROW BOOK 14 – THE EYES OF ASMODEUS) One day, Rahn would pay for her loss.
The dim light of a nearby village glowed over the hilltops.
“So where do you think our missing pages are now?”
“Ahm pretty sure they never left the monastery. Here, look.”
Shaun pulled a pamphlet from his pocket and threw it to Tom.
“ ‘Statistical Account of the Villages of Houston and Killallan.’
“Skip tae the bit aboot the church. Ah’ve marked the page.”
“ ‘Upon the fourth wall of the aisle there is a large frame of timber, on which 2 pictures seemingly done with oil colours, but much worn out. On the right side, a man in complete armour, resembling that of a Knight Templar, with an inscription in Saxon characters over his head, some words of which are effaced – Hic jacet Dominus Joannes Houston de codem miles, qui obit anno dom MCCC.’”
“Templar’s were aye buried beneath the church slabs.” said Shaun. “The painting probably marks his tomb.”
“You think the pages were buried with the Knight?”
“To protect his secret. Aye.”
“Good work Shaun. By my reckoning, Pentecost and his men arrived in only a day or two ago. We just have to hope we’re one step ahead of him.” 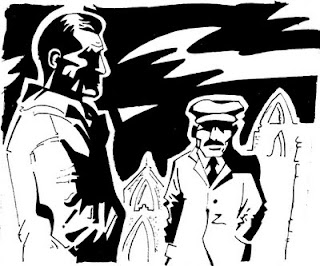