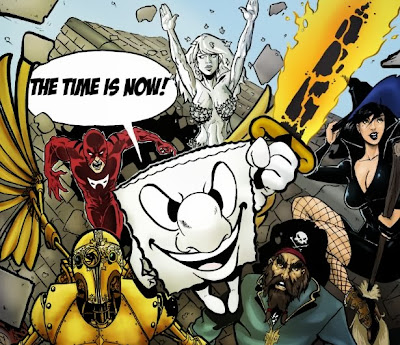 In a brief break from our regularly scheduled Christmas programming, and to try and make up a wee bit for the Big Comic Book Bash postponement last month, just had to share this preview panel for a short strip Andy and I are doing. Behold, Inverclyde's first superhero team! It was a sort of an in joke initially, inspired by the very cool Absent Voices project, but Andy did such a bang up job here that I'm thinking the guys need their own adventure. Or at the very least a teeshirt or line of 3D printed toys (assuming someone wants to buy me a 3D printer).

So from left to right we have -

Tin Jimmy - James Watt's steam powered robot, reactivated in the 21st century
Catman - Not the hero Greenock needs, but the one it deserves
Mr Cube - Tough talking hard nosed sugar cube emblem often used by Tate and Lyle
Egeria - The living statue, having adventures when not hanging around West Blackhall Street
Captain Kidd - The super pirate. Somehow.
Mary Lamont - Teenage witch, back from the dead for revenge. And perhaps dancing.

The short and sweet Mr Cube Strikes! strip will appear early next year. The first issue of our Local Heroes comic will be out...uhm...well whenever we get around to it probably. Someday maybe. Who knows? Certainly we've a couple of new comics coming out next year...

Meantime, if local heroes and mysterious steampunk robots are your thing, you may enjoy the very similar themes of my other project, kids fiction, Tin Jimmy.

Coming up next in our Ghost Story selection, it's Cantus Arcticus from Mark Jones, a terrifying tale in five parts. (Mark has put the rest of us to shame this year)